Quite many of the scientific names that we use for mushrooms actually do date from ancient times, and are known through the writings of the Greeks and Romans. It is known that edible mushrooms were collected from forests in ancient Greek and Roman times and highly valued, though more by high-ranking people than by peasants. 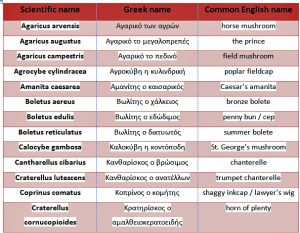 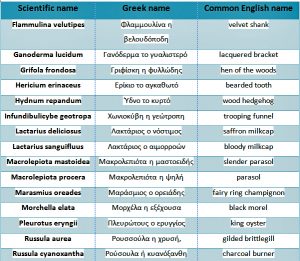 Sources:
Mushroom Library: Alphabetical List by Scientific Name
English names for fungi (July 2019)
Identification, Names and Nomenclature of Common Edible Mushrooms
Fungi and Place-Names, the Origin of Boletus
The Great Lakes nexus page of Mushroom, the Journal of Wild Mushrooming
Origins of Scientific Names of Fungi
The meaning of the Latin/Greek names of some larger fungi
Wild Mushrooms (in Greek)